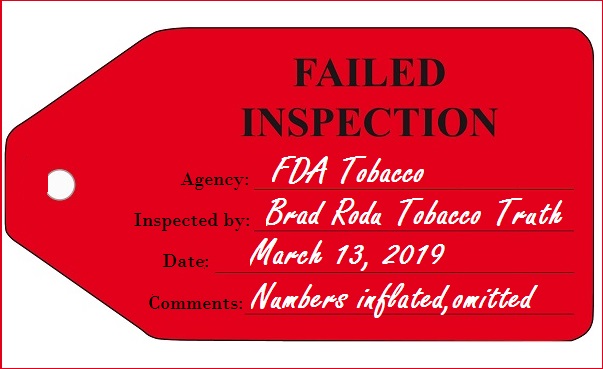 Today Dr. Scott Gottlieb announced a draft compliance policy predicting that ““some flavored e-cigarette products will no longer be sold at all…other flavored e-cigarette products that continue to be sold will be sold only in a manner that prevents youth access…” (here)
Gottlieb has blamed a so-called youth vaping “epidemic” on illegal retail sales and “kid-friendly marketing.” (here)  Last week he spotlighted Walgreens, saying that 22% of its stores had illegal sales of tobacco products to minors “since the inception of the FDA’s retailer compliance check inspection program in 2010.”  He also listed 14 other national retail chains that had violation rates of 15% to 44%.
These shocking numbers are, in fact, inflated through the use of cumulative math covering a nine-year period. I reported on public FDA inspection data just after the program started (here) and again in 2016 (here).  In response to current FDA news, I have now analyzed the data from 2018 (available here), the year Dr. Gottlieb said youth vaping skyrocketed, based on still unpublished data from the National Youth Tobacco survey.  My findings on the 2018 FDA inspection data are illuminating.
FDA contractors conducted over 146,000 retailer inspections in 2018, resulting in a national average violation rate of 12%, just one percent higher than in 2015-16 (here).  The following table contrasts the cumulative violation rate (range) reported by Dr. Gottlieb with the actual rate in 2018.

Dr. Gottlieb did not need to use inflated cumulative numbers to demonstrate that national retail chains, especially those with gas stations, are still selling tobacco products to underage youth.  Additionally, his focus on Walgreens, with a 2018 violation rate of 9%, three points lower than the national average, seems inappropriate.
Other key data points were omitted from Dr. Gottlieb’s remarks.  First, there is a large variation in state violation rates, from Georgia (2.2%), Montana (2.7%), Hawaii (3.0%) and California (4.2%) all the way to North Dakota and Michigan at 22.5%; Ohio and Nevada at 22.9%.  Retailers’ state rates were similarly diverse. For example, Walgreens and Walmarts in Georgia had much lower rates than those in Ohio.  This doesn’t absolve retailers of responsibility.  Rather, it indicates that state policies and attitudes may be contributing as significantly to underage sales as retailers.
While Dr. Gottlieb’s regulatory effort is aimed ostensibly at combatting youth access to e-cigarettes, only 19% of the cited 17,500 violations in 2018 involved those products.  Cigars were the most frequent culprit (44%), followed by cigarettes (33%), with smokeless tobacco at a mere 4%.
There is no excuse for a national tobacco sales violation rate of 12%; retailers everywhere must stop selling to underage youth.  Still, the federal government’s own survey data shows that more than 90% of teens who use tobacco products obtain them from social sources, such as friends or family.  Only 10% of current teen vapers buy their own e-cigs (here).  Given these facts, the FDA can’t hold retailers entirely responsible for teen e-cigarette use.